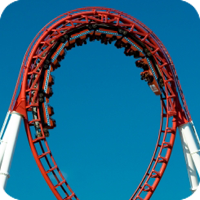 The term "whiplash" was first used in 1928 to define an injury mechanism of sudden hyperextension followed by an immediate hyperflexion of the neck that results in damage to the muscles, ligaments, and tendons - especially those that support the head. Today, we know that whiplash injuries frequently do not result from hyperextension or hyperflexion (extension and flexion beyond normal physiological limits), but rather an extremely rapid extension and flexion that causes injuries.

Due to their complicated nature and profound impact on people's lives, few topics in health care generate as much controversy as whiplash injuries. Unlike a broken bone where a simple x-ray can validate the presence of the fracture and standards of care can direct a health care professional as to the best way in which to handle the injury, whiplash injuries involve an unpredictable combination of nervous system, muscles joints and connective tissue disruption that is not simple to diagnose and can be even more of a challenge to treat. In order to help you understand the nature of whiplash injuries and how they should be treated, it is necessary to spend a bit of time discussing the mechanics of how whiplash injuries occur.

The Four Phases of a Whiplash Injury

During a rear-end automobile collision, your body goes through extremely rapid and intense acceleration and deceleration. In fact, all four phases of a whiplash injury occur in less than one-half of a second! At each phase, there is a different force acting on the body that contributes to the overall injury, and with such a sudden and forceful movement, damage to the vertebrae, nerves, discs, muscles, and ligaments of your neck and spine can be substantial.

During this first phase, your car begins to be pushed out from under you, causing your mid-back to be flattened against the back of your seat. This results in an upward force in your cervical spine, compressing your discs and joints. As your seat back begins to accelerate your torso forward, your head moves backward, creating a shearing force in your neck. If your head restraint is properly adjusted, the distance your head travels backward is limited. However, most of the damage to the spine will occur before your head reaches your head restraint. Studies have shown that head restraints only reduce the risk of injury by 11-20 percent.

During phase two, your torso has reached peak acceleration - 1.5 to 2 times that of your vehicle itself - but your head has not yet begun to accelerate forward and continues to move rearward. An abnormal S-curve develops in your cervical spine as your seat back recoils forward, much like a springboard, adding to the forward acceleration of the torso. Unfortunately, this forward seat back recoil occurs while your head is still moving backward, resulting in a shearing force in the neck that is one of the more damaging aspects of a whiplash injury. Many of the bone, joint, nerve, disc and TMJ injuries that I see clinically occur during this phase.

During the third phase, your torso is now descending back down in your seat and your head and neck are at their peak forward acceleration. At the same time, your car is slowing down. If you released the pressure on your brake pedal during the first phases of the collision, it will likely be reapplied during this phase. Reapplication of the brake causes your car to slow down even quicker and increases the severity of the flexion injury of your neck. As you move forward in your seat, any slack in your seat belt and shoulder harness is taken up.

This is probably the most damaging phase of the whiplash phenomenon. In this fourth phase, your torso is stopped by your seat belt and shoulder restraint and your head are free to move forward unimpeded. This results in a violent forward-bending motion of your neck, straining the muscles and ligaments, tearing fibers in the spinal discs, and forcing vertebrae out of their normal position. Your spinal cord and nerve roots get stretched and irritated, and your brain can strike the inside of your skull causing a mild to moderate brain injury. If you are not properly restrained by your seat harness, you may suffer a concussion, or more severe brain injury, from striking the steering wheel or windshield.

As we discussed briefly in the introduction, whiplash injuries can manifest in a wide variety of ways, including neck pain, headaches, fatigue, upper back and shoulder pain, cognitive changes and low back pain. Due to the fact that numerous factors play into the overall whiplash trauma, such as the direction of impact, speed of the vehicles involved, as well as gender, age, and physical condition, it is impossible to predict the pattern of symptoms that each individual will suffer. Additionally, whiplash symptoms commonly have a delayed onset, often taking weeks or months to present. There are, however, a number of conditions that are very common among those who have suffered from whiplash trauma.

It is the single most common complaint in whiplash trauma, being reported by over 90 percent of patients. Often this pain radiates across the shoulders, up into the head, and down between the shoulder blades. Whiplash injuries tend to affect all of the tissues in the neck, including the facet joints and discs between the vertebrae, as well as all of the muscles, ligaments, and nerves.

Disc injury is also a common cause of neck pain; especially chronic pain. The outer wall of the disc (called the annulus) is made up of bundles of fibers that can be torn during a whiplash trauma. These tears, then, can lead to disc degeneration or herniation, resulting in irritation or compression of the nerves running through the area. This compression or irritation commonly leads to radiating pain into the arms, shoulders and upper back, and may result in muscle weakness.

Damage to the muscles and ligaments in the neck and upper back are the major cause of the pain experienced in the first few weeks following a whiplash injury and is the main reason why you experience stiffness and restricted range of motion. But as the muscles have a chance to heal, they typically don't cause as much actual pain as they contribute to abnormal movement. Damage to the ligaments often results in abnormal movement and instability.

After neck pain, headaches are the most prevalent complaint among those suffering from whiplash injury, affecting more than 80 percent of all people. While some headaches are actually the result of direct brain injury, most are related to injury of the muscles, ligaments and facet joints of the cervical spine, which refer pain to the head. Because of this, it is important to treat the supporting structures of your neck in order to help alleviate your headaches.

A less common, but very debilitating disorder that results from whiplash is temporomandibular joint dysfunction (TMJ). TMJ usually begins as pain, clicking and popping noises in the jaw during movement. If not properly evaluated and treated, TMJ problems can continue to worsen and lead to headaches, facial pain, ear pain, and difficulty eating. Many chiropractors are specially trained to treat TMJ problems or can refer you to a TMJ specialist.

Believe it or not, mild to moderate brain injury is common following a whiplash injury, due to the forces on the brain during the four phases mentioned earlier. The human brain is a very soft structure, suspended in a watery fluid called cerebrospinal fluid. When the brain is forced forward and backward in the skull, the brain bounces off the inside of the skull, leading to bruising or bleeding in the brain itself. In some cases, patients temporarily lose consciousness and have symptoms of a mild concussion. More often, there is no loss of consciousness, but patients complain of mild confusion or disorientation just after the crash. The long-term consequences of a mild brain injury can include mild confusion, difficulty concentrating, sleep disturbances, irritability, forgetfulness, loss of sex drive, depression and emotional instability. Although less common, the nerves responsible for your sense of smell, taste and even your vision may be affected as well, resulting in a muted sense of taste, changes in your sensation of smell and visual disturbances.

Dizziness following a whiplash injury usually results from injury to the facet joints of the cervical spine, although in some cases injury to the brain or brain stem may be a factor as well. Typically, this dizziness is very temporary improves significantly with chiropractic treatment.

Although most people consider whiplash to be an injury of the neck, the low back is also commonly injured as well. In fact, low back pain is found in more than half of rear-impact collisions in which injury was reported, and almost three-quarters of all side-impact crash. This is mostly due to the fact that the low back still experiences a tremendous compression during the first two phases of a whiplash injury, even though it does not have the degree of flexion-extension injury experienced in the neck.

Whiplash is a unique condition that requires the expertise of a skilled health professional specially trained to work with these types of injuries. The most effective treatment for whiplash injuries is a combination of chiropractic care, rehabilitation of the soft tissues and taking care of yourself at home.

Chiropractic care utilizes manual manipulation of the spine to restore the normal movement and position of the spinal vertebrae. It is by far the single-most effective treatment for minimizing the long-term impact of whiplash injuries, especially when coupled with massage therapy, trigger point therapy, exercise rehabilitation, and other soft tissue rehabilitation modalities.

The term 'soft tissue' simply refers to anything that is not bone, such as your muscles, ligaments, tendons, nervous system, spinal discs and internal organs. During a whiplash injury, the tissues that are affected most are the soft tissues, the muscles, ligaments, and discs in particular. In order to minimize permanent impairment and disability, it is important to use therapies that stimulate the soft tissues to heal correctly. These include massage therapy, electro-stimulation, trigger point therapy, stretching and specific strength and range of motion exercises.

The most effective chiropractic care and soft tissue rehabilitation will be limited in its benefit if what you do at home or at work stresses or re-injures you on a daily basis. For this reason, it is important that your plan of care extends into the hours and days between your clinic visits to help speed your recovery. Some of the more common home care therapies are the application of ice packs, limitations on work or daily activities, specific stretches and exercises, taking nutritional supplements and getting plenty of rest.

In some severe cases of whiplash, it may be necessary to have some medical care as part of your overall treatment plan. The most common medical treatments include the use of anti-inflammatory medications, muscle relaxants, trigger point injections and, in some cases, epidural spinal injections. These therapies should be used for short-term relief of pain, if necessary, and not be the focus of treatment. After all, a drug cannot restore normal joint movement and stimulate healthy muscle repair. Fortunately, surgery is only needed in some cases of herniated discs, when the disc is pressing on the spinal cord, and in some cases of spine fractures. 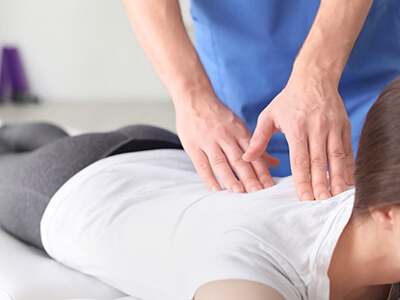 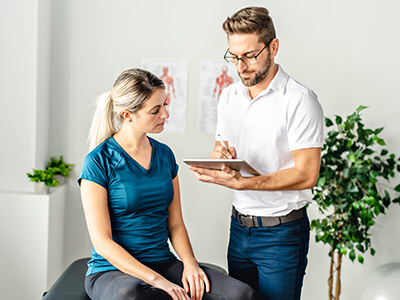 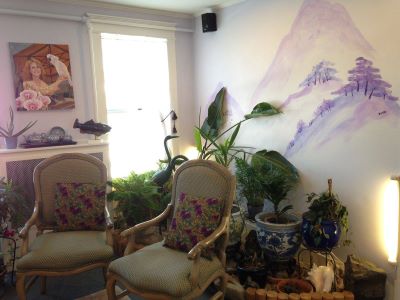 At Bruns Chiropractic and Massage Therapy Clinic , we provide the highest quality service to all our patients. Schedule your appointment today.

We've copied your review, after you click 'Publish' please paste your review by selecting 'ctrl' + 'v' into the review comments section.